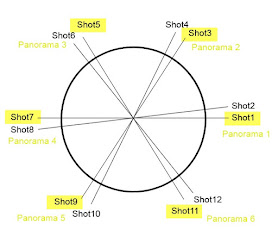 My senior research is focused on creating a user-customizable game environment. I am interested in creating new ways to bring people together and have them share personal and meaningful experiences. This senior research will introduce another way people can share visual experiences. By creating a 3-dimensional replica of a real place just by taking a few pictures around a place with a mobile phone, the user would be able to share the experience of being in that place with many other users.

The user takes pictures around a place in 360 degrees (as shown in the figures 1 and 2), using a mobile device and the application will implement the following:

It will stitch the images together and create the panorama

It will then create a 3d scene with the information acquired in the previous steps. The panoramic photography will be texture mapped on to a half dome. The objects in the scene will be extruded according to the depth values so that the ones closer to the user in the physical world are closer.

I am using OpenCV for iOS and OpenGL ES 2.0 to implement the application in iPhone. 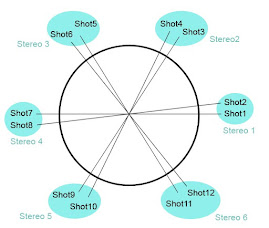 As I am very interested in providing unique learning environments for young students, I am envisioning to develop it into a gaming environment that will allow students to learn about distant places in a more friendly and fun manner. Students can record their visits to different places and later share the experience with their classmates by playing the game together. It will be a customizable guessing game in which students guess the names of historical monuments. As an example, if a student visits Egypt, then the class as a whole can visit the virtual place created by the student, play the game together and learn about the monuments in Egypt by interactively guessing and tagging the names of the Great Pyramids. 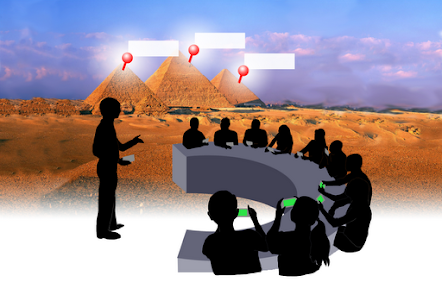